Hostess With the Mostest... Boa 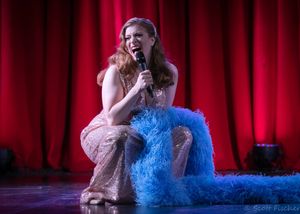 Mr. Snapper and I embarked on a collaboration with Shoshana of Viva Dallas Burlesque last summer-- creating murder mystery burlesque shows. They had to fulfill the needs and wants of the mystery enthusiasts while entertaining the burlesque lovers. Our September debut episode was great, and we learn from each show we do.

Because we have decades in the game as actors, Mr. Snapper and I are currently switching off the heavy lifting of the murder mystery hosting. A scripted show is a different beast from your standard burlesque show, and we participated in a few scripted burlesque shows in Los Angeles before we wrote for Nearly Naked Nutcracker.

I co-hosted the most recent episode with MT Molotov-- he introduced the burlesque acts and dropped some clues and I played detective. I had to assess the clues and reveal information, plus keep the ball rolling on the mystery.

Part of the job entails entertaining the audience while they talk amongst themselves to wager guesses on the murders. I couldn't strip because I had to be ready to get the show back on the road as soon as they were done voting, which can take five to fifteen minutes. I decided to sing, and I brought my big blue boa along for the ride.

Since this show takes a lot of my time and attention (and I don't mind that part), I had to order this gown online. I hemmed it on the fly one day, and discovered at the show that it was still too long for my body. I kept having to lift it to walk, making it tougher to parade the way I'd hoped during my song. (Thanks to physical therapy, my knees endured this sexy squat with the boa.)

I love getting the opportunity to host. I like talking to the audience and having more time to connect with them. 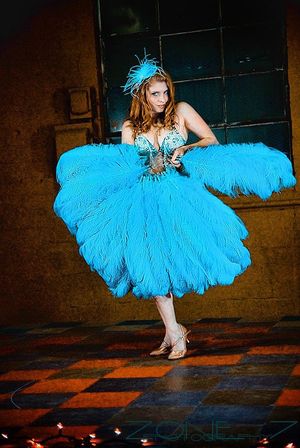 The first time I performed in Dallas was the summer of 2010, almost three years after my first amateur burlesque performance with a group and four years after I started pole dancing. I'd been back in beginner ballet classes on and off for a few years. (Making beautiful shapes while fan dancing was a great excuse to be more on than off with ballet.)

Before burlesque, I'd earned my stripes as an actor and singer. I did way more acting than singing. I still have dreams of being able to play guitar for an audience, but that's going to require more practicing than I've done in at least five years.

This photo by Lou O'Neal in a hot warehouse in Ft. Worth in summer showcases my beautiful fans designed by Catherine d'Lish and built by Evie Lovelle. I still have those fans. Invest in quality props and costumes and they will last.

The costume was relatively inexpensive compared to my current creations. I sold it to Gwen Ruby a few years ago and it looks incredible on her. I've grown so much as a costumer and performer that I was ready to move along from this costume.

My metabolism has slowed a bit and my flexibility has diminished a bit from the day this photo was snapped. However, that knowing look in my eye is now matched with actual knowingness. While I'm always learning and always working to better engage and delight audiences, I'm so very comfortable when I hit the stage to strip.

No matter where you joined me on this journey, I appreciate you letting me entertain you.